Well, after a couple of weeks successfully feeding the garden birds, Trichomonosis has reared its ugly head yet again! This time, a Goldfinch and a Greenfinch are infected 🙁

I’ve decided to stop feeding (again), this time for a couple of months to hopefully completely eradicate the problem.  It’s just so odd that I’ve never ever come across this before and now all of a sudden I’ve had at least 5 birds in the last 5 months!

The only bird I’m feeding at the moment is Colin (or Colleen!) who has an injured leg and a bad eye!  He started spending the nights on the roof, which worried me immensely as we live in a bungalow & next door’s cat is always prowling around the rooftops!  He cowers away from all birds (including other pigeons), and when he comes down to feed, he’ll snuggle down under the patio door & fall asleep! Again, this worried me due to the cat 🙁

So, my ever resourceful other half made a “coop” for him to rest in!  He made it from an old drawer, that was down the side of the house (from previous tenants), and some mesh.  We open the patio door, open the “coop” and he wanders in and sleeps!  He seems to like it.  The way I see it is if he didn’t then he wouldn’t come in!  I am concerned though that we’re doing more harm than good… he shakes quite a bit as well so I’m not sure if he’s old or in pain – does anyone have any suggestions? 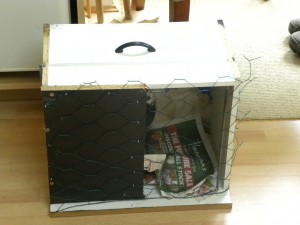 All in all, we’ve not had much bird action in the garden – the vegetables & flowers are doing great though 🙂 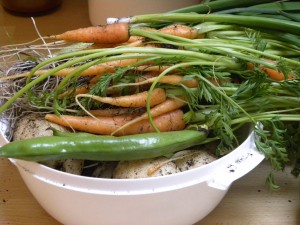 Veg picked from our garden 🙂 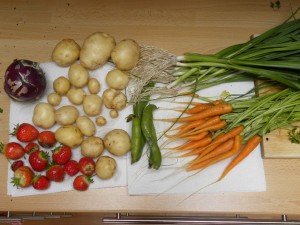 Veg after rinsing - they were delish!

I’m hoping (again) that things will pick up (bird-wise) after a few more weeks of no feeding, and that hopefully the Trichomonosis will have disappeared for good!

In the meantime, below is a photo I took last year of a Stonechat, just to cheer me up 🙂 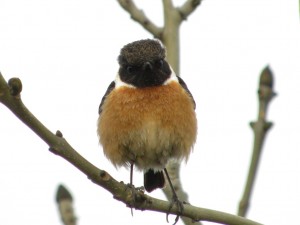