I need inspiration!  I’m posting this to ask for help from you all regarding ways to feed birds other than House Sparrows!  Whilst I do love the Sparrows, and I know they are/were in decline, there are just too many of them in our garden and the other birds  (except the Starlings!) aren’t getting a look in 🙁

So we’ve been trying to think of different feeders or ways of feeding which the Sparrows wouldn’t really go for.  The first thing we (& when I say we, I really mean my other half !) thought of were the Sunflowers which have now gone over but are full of seeds.   We hung  them up for the Coal Tits & Goldfinches which we’ve seen flitting around. 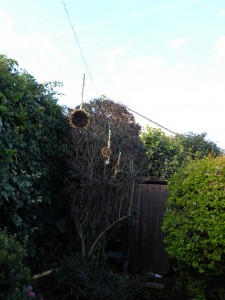 Thing is, we never actually planted any Sunflowers this year at all – these actually grew  in amongst the Swiss Chard.  We can only assume they were from seeds dropped by the birds as they flew over! 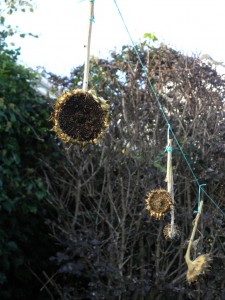 Good news is the Sparrows haven’t touched them,  but the Goldfinches have been ignoring them too – at least the Coal Tit has been making use of them 🙂 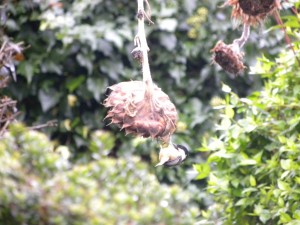 Another feeder that we’ve put up this weekend is a small seed feeder positioned away from the rest of the feeders, on the patio in the hope that the smaller birds will be able to feed quietly away from the main lawn. 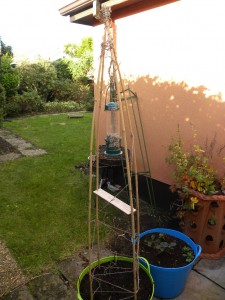 The feeder was hung from the middle of the canes which were used for our peas which we grew during the summer. 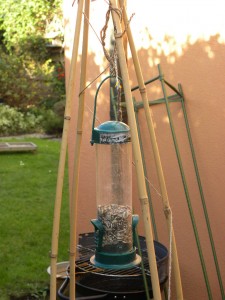 Again it was the Coal Tit which has taken advantage of this so far and has visited it throughout the afternoon.  Although a solitary Goldfinch did perch on one of the canes & look at it for a few seconds before flying off!  I’m glad to say the Sparrows have been nowhere near it……yet!

I’m also pleased to say the Starlings don’t stand a chance of landing on it either – even though they have landed on one of the other seed feeders and have successfully emptied it of seed!  This one watched me the whole time I was out tying the new feeder onto the cane! 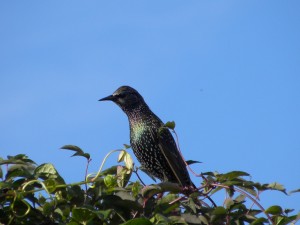 I actually saw a Chaffinch today for the first time in the garden but only stayed for a few minutes before flying away, not sure if he was intimidated by the number of Sparrows bickering around him.

Is there anything else I can put out that the Sparrows will ignore?  Any other particular food that the other birds like but the Sparrows don’t?  They seem to be monopolising the feeders & the ground at the moment 🙁